To sum up part one of this topic, when we’re at the cabin, we’re far away from anyone who might be able to help us in an emergency. So we try to have good plans in place—but sometimes stuff happens. That’s what this part is about.

Have you ever had to call for help?

For help, yes, once. For evacuation, thankfully not.

Over the years, the cabin has seen a broken nose (Stewart’s friend Don), an unfortunate encounter between an axe and someone’s foot (Stewart’s friend Jack), a case of pneumonia (Stewart), and a bluff from a grizzly bear. In all these instances, the right mix of people and supplies have been on hand to avoid emergency calls or evacuation.

The closest we’ve come to calling for a helicopter was the year Stewart was badly burned. To quickly sum up the part that makes me want to cover my eyes even though I was there when it happened: Stewart was lifting a couple of gallons of boiling water off the propane burner when the potholders slipped. A cascade of scalding water hit his thigh and then the wood floor, swiping his feet out from under him.

The burns on his leg were serious. We doused them with dipper after dipper of cool rainwater and then put him to bed with some Advil while we figured out what to do next. I still remember how he dropped into a quiet, almost meditative state after the initial chaos of the injury. At first I worried that he might be going into shock, but the calm that settled over him may have been preventing exactly that.

While Stewart rested, I sat on the floor next to the bed and read the first-aid manual out loud. At the cabin, we keep a copy of National Outdoor Leadership School (NOLS) Wilderness First Aid and, after this experience, I’m not sure there’s another book of any kind that I could recommend more highly.

The section on thermal burns told us that we had done exactly the right things to start: remove the clothing and cool the wounds with the cleanest water available. It’s not like we’d thought about it. In those first frightening moments, we were acting on instinct and probably what we’d heard in the past. What I remember is Stewart screaming in pain pulling his pants off and me ferociously barking orders to get him outside to the barrel of cold water. We were totally out of control and at the same time acting with a kind of white-light speed and clarity. 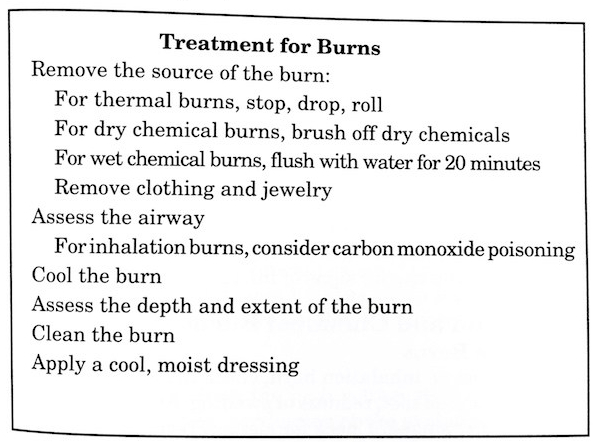 The manual even gave us a checklist to assess the burns and decide whether to call for evacuation. We determined that Stewart had a combination of 1st and 2nd degree burns on about 5% of his body. We decided we could treat his burns on site, doing our best to avoid infection.

I felt lightheaded and shaky as I pulled together what we would need to clean and dress the wounds. I carried the manual with me and tried to focus on one thing at a time: towels, gauze, antibiotic ointment, tape. All of it as sterile as possible. Also, the things that we might need later: Vicodin and an oral antibiotic for skin infections. The first-aid manual became our bible for the next several days.

I learned from the NOLS book how to drain and clean the burns and we got better at dressing his thigh. After a couple of days, I did use the sat phone to call the medical clinic in Healy to make sure we were on the right track and to ask for tips. The nurse was patient and funny; she laughed when I described our wound dressing process. “It’s hard with thighs,” she said. “They stand up, it falls down.” Exactly.

She listened carefully as I described everything that happened and all that we had done. (This is not as serene a process as it may sound. I was up on a blustery ridge hollering into phone as big as my head.) She praised our efforts and how well prepared we were, and she said Stewart would likely be able to stay put as long as we didn’t run out of the first aid stuff he needed. Because the helicopter would be coming for me in a couple of days, she put together a package of burn treatment supplies and sent it down to the Denali helipad. The pilot brought the supplies to the cabin when he came to pick me up. After I was back in town, I stopped at the clinic to say thanks and make a donation, though they hadn’t asked for anything at all.

By the time I left, Stewart was up and around again. We had prevented infection and he never even needed the Vicodin—though I had thought about taking some myself. During the first days after Stewart got hurt, I not only learned to be a nurse, but I did the cooking, wood chopping, water getting, and everything else while Stewart gave me instructions from his perch by the window. When he got too bossy, I’d remind him he wasn’t in a great position to be ordering me around, thank you very much. 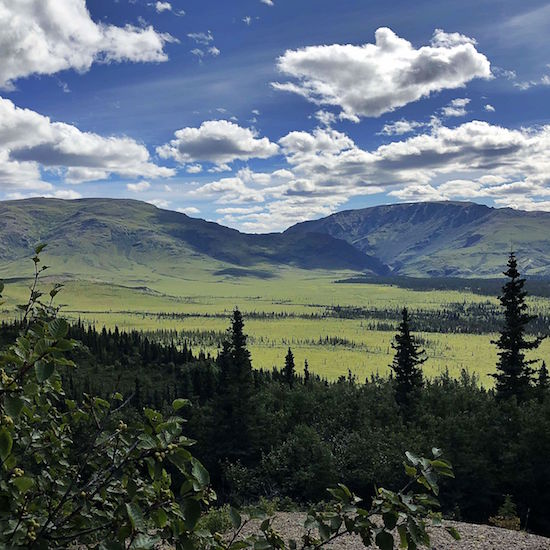 After my call to the nurse, I sat alone for a while up on the ridge. The river gorge stretched away in the distance and the hills beyond that and then just beyond that—I knew it even if I couldn’t see it—the giant of all the crazy beautiful mountains in North America. I took a deep breath. I, too, was impressed that we’d done so well, but at the same time I knew we’d need a better emergency plan for the future. If the situation had been worse and the hour later, I wouldn’t have known what to do or whom to call. Now we have even smarter plans in place. We were lucky.