And one of the most valuable pieces of equipment, toted all the way up the Missouri, across the Bitterroots and down the Columbia to the Pacific, and back home again, was a large-sized Dutch oven. ~ Don Holm reporting on the story of Lewis and Clark

It took me a long time to figure out how to bake in the Dutch oven. Typical notes from the early days look like this:

Second attempt at a blueberry crumble—much worse than the first! The topping collapsed into the fruit and the bottom scorched miserably (again). What I scraped out of the baking dish tastes fine, but it looks like a hunk of bear shit.

This was when I was using the Dutch oven on a propane burner. When I tried it on top of the woodstove, my efforts immediately improved. Two books were most helpful in my learning:

I love the last one because it’s a Dutch-oven love story, with everything you need to know to develop an affectionate understanding for both your Dutch oven and the fire that supports it. You do, unfortunately, have to work your way around some cringe-y quotes:

Dutch oven cooking is usually never the same twice. Do your own thing, but remember, cook like a young bride that has a grouchy husband, work to make it right the first time.

What I usually remember is that I have a limited supply of the best ingredients on hand—we had to work hard to pick those wild blueberries—and I don’t want to ruin them. 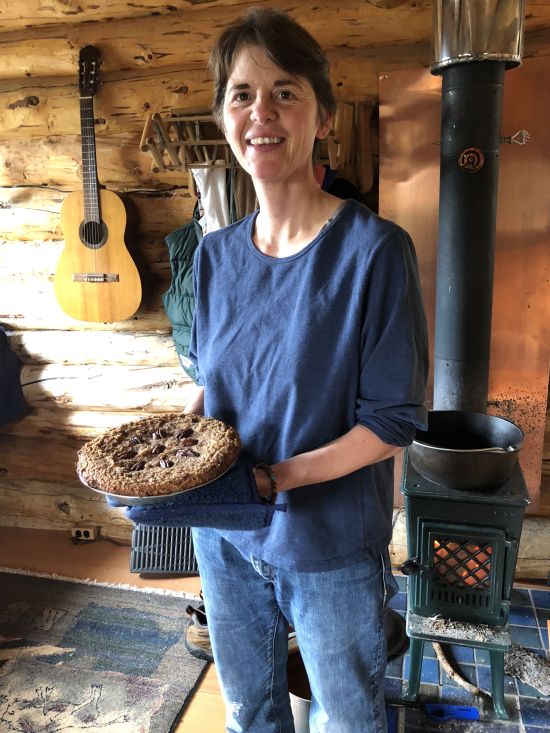 From this book, I did learn that our Dutch oven is really a “bean pot,” or an indoor Dutch oven, because it lacks the three short legs sported by camp Dutch ovens to help them balance in the coals of a fire. Also, ours doesn’t have the traditional flat, flanged lid designed to work with an open fire by holding hot coals on top. It works fine in the cabin, though.

For cooking, we are a bit hampered by the small size of our woodstove—diminutive because it doesn’t take much to heat our tiny place in summer—and by my own dietary preferences. I generally don’t bake with regular flour or sugar. That means a lot of the recipes in woodstove cookbooks won’t work for me as written, but the methods help me improvise.

I make these cakes with almond flour and honey. I bake them in an old 8” Mother Keller’s pie tin, saved from a friend who loved sweets and used to bring out whole pies when he came to the cabin.

I grease the pie tin, fill it with the cake mixture, then set it on top of canning rings in the Dutch oven. This keeps air moving around the cake and prevents the bottom from burning. The baking time is totally unpredictable; it needs to cook until the top springs back. If the stove is really hot it may take only two hours; if it’s not so hot, maybe more like four. The honey causes the cake to brown rather deeply, but that’s not the same as burnt. We enjoy these cakes with a cup of tea and a generous dollop of  wild blueberry jam (something I usually get right the first time).

Mix all ingredients well and bake according to the instructions in the paragraph above.

Same as banana cake but substitute 1/2 cup applesauce and one peeled, diced apple for the bananas.

Same as banana cake but substitute 1 c. cooked, mashed sweet potato for the bananas. For the add-ins, I used a large handful of mixed walnuts and dates. I think raisins would also be good. Instead of pumpkin pie spice, I used 1 tsp cinnamon, 1 tsp nutmeg, and 1/2 tsp. powdered ginger.

August 2019 Note: I wrote this last summer and forgot to post it. We’re offline at the cabin now but I’m setting this to auto-publish so I won’t do that again.