I’ve been providing structure for this trip by writing every afternoon or evening, but that didn’t happen last night because we were in a spot of bad weather and I felt so queasy that I had to crawl into my berth to wait it out.

I suspected there would come a point at which my trusty Sea Bands would not be enough to hold seasickness at bay. I fished up the patches prescribed by my doctor and pressed one into service behind my left ear. After an hour or so, drowsiness kicked in and I fell asleep hard. This morning, as we’re pulling into Juneau, I don’t feel queasy at all and I’m not even groggy from the drug. The patch can stay in place for up to three days, so it should be enough to get me to solid ground in Whittier on Thursday.

Meanwhile, I thought this would be a good time to go back to the Cabin FAQ, filling in one of the spaces on the list of questions. Here’s the story of how Stewart got the land on which he built our cabin.

Question: How did Stewart get the land?

In the early 1970s,  Alaska offered a program called “open to entry” which allowed state residents to stake out and lease small parcels of remote land. The primary purpose of the program was to open the deep wilderness for recreational use. This way of acquiring land was available only briefly, shutting down in 1973 because of the many conflicting claims to land in Alaska: state, federal, and native.

Stewart was living outside of Fairbanks in 1972, in a cabin he built after deciding to drop out of the Ph.D. program in geophysics at the University of Alaska. (If you’re interested, his most recent podcast for The Painting Experience tells the story of giving up a career path that didn’t suit him and moving into the woods.)

When word got around about open to entry, Stewart and a buddy went on a backcountry ski trip into the foothills of the Alaska Range to look for land. Out of the hundreds of thousands of available acres, they each staked a portion of five acres. They leased these parcels from the state for a small sum — something like $40 per year — and eventually bought them for a few hundred dollars apiece. Later, Stewart purchased his friend’s five acres, so now he has ten, the two properties joined at one corner like a squared-off figure eight. A few other people also registered parcels in the surrounding landscape — which is mostly a mix of spruce and aspen forest, glacial rivers, ridges, and big tundra valleys — but no one else built anything in the area.

Years ago, Stewart wrote the story of the search for the land on which he eventually built the cabin. He said I could share that story here:

As the spring sun hesitantly extended its warming tendrils into the frozen forest on Old Nenana Road, the bulky frame of my neighbor, Mac, appeared at the door. He lived just a half hour from my cabin, and he stuck his massive extra-long snowshoes in a snowbank off the porch before squeezing through my tiny cabin door. He was beside himself with enthusiasm for a program just made available by the State of Alaska, where residents could claim parcels of land in remote areas, with one caveat — they first had to reach them.

I was feeling eager to venture beyond the tight perimeter I had drawn around my solitary existence, and this was an opportunity to further explore the country. Excited by the aura of pioneering, we planned an April ski trip to an inaccessible territory in the foothills of the Alaska Range. Leaving our truck at an outpost as far as the road would take us, we skied with full packs through thick snow into some of the wildest land imaginable. Populated by moose, caribou, wolves, grizzlies — which we hoped were still hibernating — and all manner of smaller creatures and birdlife, we ventured into the heart of Alaska’s great interior as it was waking from its winter slumber.

That first day we crossed many miles of open tundra and dropped down into the wooded drainage of a river by evening. We found an abandoned cabin and made our night as comfortable as possible amidst the tattered belongings of some bygone trapper. The next morning, eager to push on, we broke trail over a mountain saddle to yet another river basin, this one miles and miles across. Before us stood endless snow covered peaks as far as the eye could see, with rivers of thick winter ice cradled in their valleys. There were no signs of human habitation, and in the spirit of the adventure, we told ourselves that no one had set foot on this north side of this range all winter.

We began to feel comfortable under our heavy loads, and were revived being outdoors after a long winter in our cabins. We spent that next night in a lean-to fashioned from spruce branches in a peaceful grove of dense timber in the shadow of a ridge. Signs of animal life were all around us. As we skied down to the river, we scared up moose and caribou as they foraged for willow along the tributaries. At night the sound of wolves howling across the valley reverberated through our conversation as we sat by the campfire, thrilled to be so many miles from the nearest civilized dwelling.

The land here had a distinctly different quality than Two Mile. As undeveloped as my property on Old Nenana Road seemed, it was nothing compared to the breathtaking remoteness of these valleys extending endlessly westward to the Bering Sea. Across the river from where we camped were nearly a thousand miles of uninterrupted mountains and streams, virgin forests, lakes, and wetlands too numerous to name, home to populations of wild geese and cranes waiting to pour from the direction of the setting sun at the first September chill. To the south were the impossibly rugged peaks of the Alaska Range, paralleled even further south by the full backbone of the still active Aleutian chain of volcanoes that sweep in one great arch from Anchorage to Kamchatka. Swinging my gaze northward I could only begin to consider the expanses of wind scoured ridges and lushly carpeted lowlands, plied by countless multi-channeled streams, leading up to the great Brooks Range, the most inaccessible of all the mountain ranges in Alaska. And beyond even the Brooks Range was the sloping tilt of a landscape dropping down under the shifting ice flows to the depths of the darkly frigid Arctic Ocean. We couldn’t even speak of these overwhelming, wild expanses. We could only sit by the fire, sipping our tea as if this were the normal thing to do at the end of a long day’s ski. 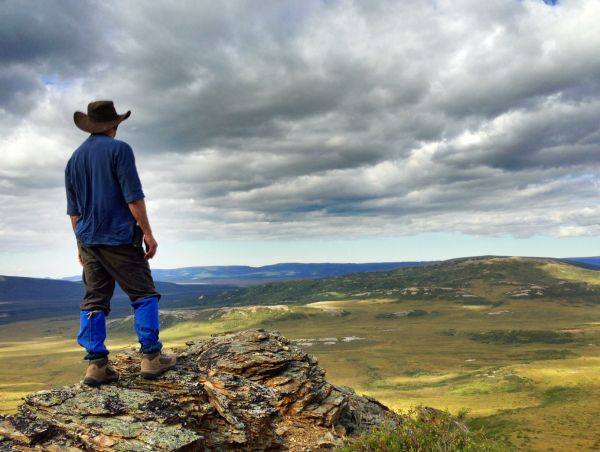 9 thoughts on “how did you get the land?”