I’ve seen this stand of graceful birch trees along our friends’ driveway countless times—in leaf and in winter, in temperatures from 38° below to 80° above, from the day Stewart and I got married in Linda and John’s backyard gazebo to the day we arrived for a good friend’s funeral to this day which, so far, is quiet.

Linda and John have been hard at work harvesting produce from their large garden—in addition to other considerable efforts like writing award winning poetry and saving the University of Alaska. This is not an exaggeration. If you haven’t heard about the governmental turmoil in the 49th State, here’s a recent article from Forbes that includes a lead photo of John, in his role as president of the University’s Board of Regents, facing down Alaska’s can-hardly-be-called Governor Mike Dunleavy, who is now the subject of a fierce recall effort. It’s not just the weather that’s been assaulting the state.

In the center of all this, who wouldn’t welcome the beauty and sanity of freshly picked, cleanly washed red and gold beets sparkling on a green lawn?

Yesterday, we picked peas, green beans, the beets, raspberries, parsley. Linda lightly steamed and then froze the beet greens, pureed some of the raspberries, dried the parsley. John made borscht. I made chocolate zucchini bread. Now I have a good-sized baggie of dried herb in my luggage, labeled “parsley,” in case of TSA confusion.

These two eat from the bounty of their garden all year. Here’s this year’s onion harvest, ready to be prepped for cool storage . . .

This year, experiencing Linda and John’s garden strengthened my resolve to do more with our “garden” (there’s not much to it) at home. Here is just one of two big, well-protected garden areas at L & J’s  . . . 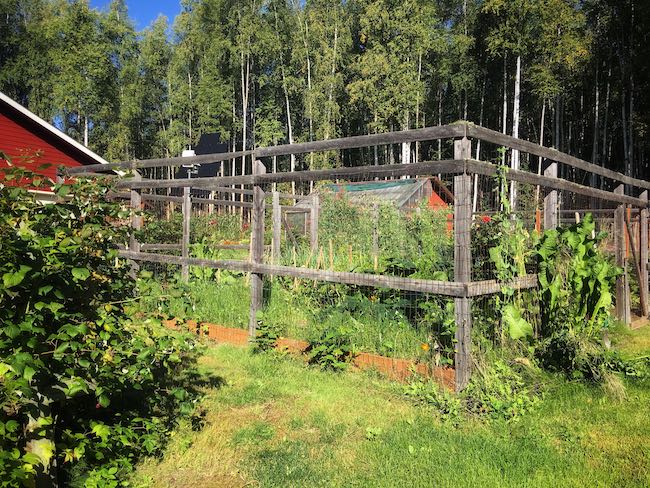 And the greenhouse for tomatoes, peppers, cucumbers, eggplant . . . 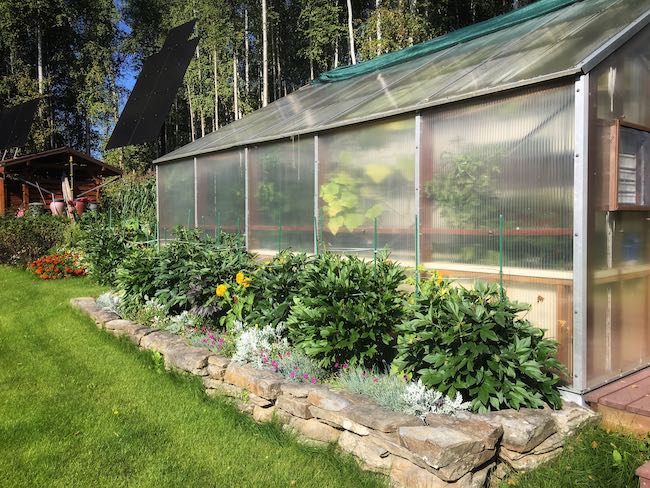 I understand that I’m in no place to overdo anything (such a hard lesson to learn) but it’s nice to have aspirations and I do have a few ideas to talk over with Stewart when he’s back home and we’re not hollering over a sat phone connection.

In the middle of the day I went for a long, gentle walk to the University’s Large Animal Research Station where I saw muskox and reindeer. In the evening, we went out after dinner to see the sandhill cranes at Creamer’s Field, where they gather in great numbers before undertaking their long flight south.

I would like this to be a photo of a muskox or a video of some cranes, but my phone battery died so it isn’t. I think there are some tiny reindeer out there, but mostly this is just to show and say that it was a beautiful day, spent very happily in the company of good friends.