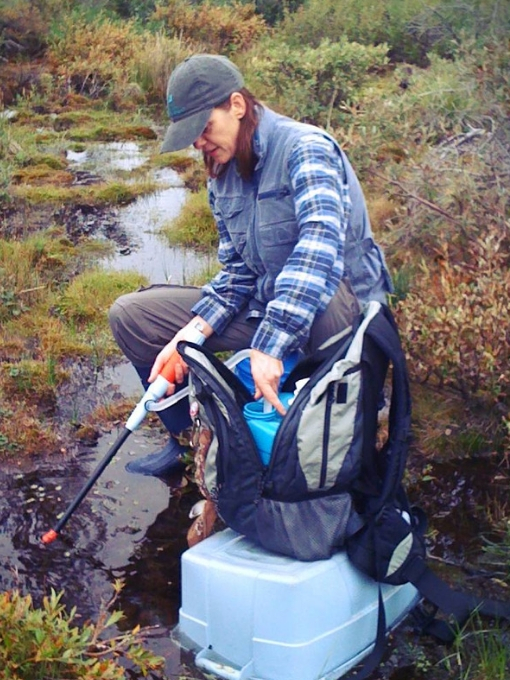 This is another entry for our Cabin FAQ. I meant to post it after we got home last year but I got distracted, or embarrassed, or something. That’s a funny thing about blogging: I want to do it but then I’m always asking myself why I’m doing it. It’s a great way not to get anything done. Anyway. This post is about the trials and blessings of getting water at the cabin. First some water notes that I wrote a long time ago and then a follow up from last summer. Pictures, too.

Now we wait for the water to boil. We tune the radio to KIAM for the forecast, hoping for rain. The weather in the Alaskan Interior has been repeating itself all week: highs in the 70s, partly cloudy, light winds. No rain.

Years ago, Stewart built a spring box around a seep on a ridge behind the cabin. His system reliably provided running water until 2009 when the box went dry. That, too, was a summer with very little rain; wildfires smoked the air on our drive from Fairbanks to Denali, from which we head west to our ten acres.

Even with the low rainfall in 2009, we had no reason to think we wouldn’t have water. It had always been so easily encouraged by Stewart’s hydrological know-how—a network of pipes, tanks, and filters such that a box built around a wet opening in the ground translated to clean water pouring from faucets for drinking, cleaning, and showering.

The first year without water, we scrambled to plan. With no rain gutters on the cabin, I wondered whether we could attach a tarp to the eaves and shape it into a sluice so the rain, when it came, might tumble into one of the barrels we had on hand. Stewart laughed when he found me outside flailing around with a tarp to no good end. He took over the implementation phase of my idea, and the contraption eventually worked as I’d hoped it would.

Before the rain comes, we begin our days by trekking through the forest to a place we call “the moose bog”—a marshy place in the tundra favored by the big browsers—to siphon water into containers. Six gallons for Stewart, three for me. We fill the containers and hoist them onto our backs, trudging them home then setting up a kind of brigade: filtering, storing, boiling for ten minutes, and filtering a second time, always being careful to keep the purified water separate from the boggy juice, which is full of moss, silt, and all manner of mooseness.

It’s hard to haul water up the hill but we try to keep cheerful about it. Many people in Alaska live year-round in dry cabins. Stewart didn’t know about the seep until well after he acquired the land, and no would have expected this cabin to have water. The hike reminds us that water is both a necessity and a miracle. It’s also good exercise and it helps us wake up in the morning. But none of that abates the feeling of relief when the rain comes and we can stop doing it. 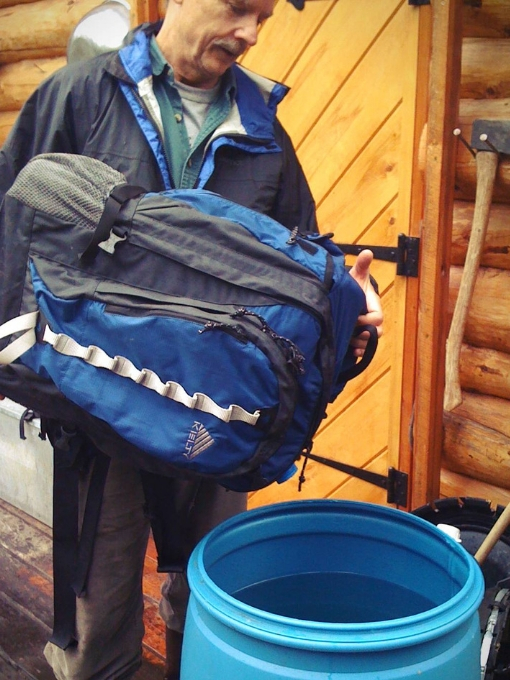 Six years have passed since I made those notes. I remember how happy we were when we rigged up that sluice in 2009 and it finally rained. We whooped and stuck our heads around the side of the cabin to watch the rain leaping and falling from the roof. In ten minutes, our barrel filled with the same amount of water we’d hauled in the morning. More rain came and the barrels soon overflowed. 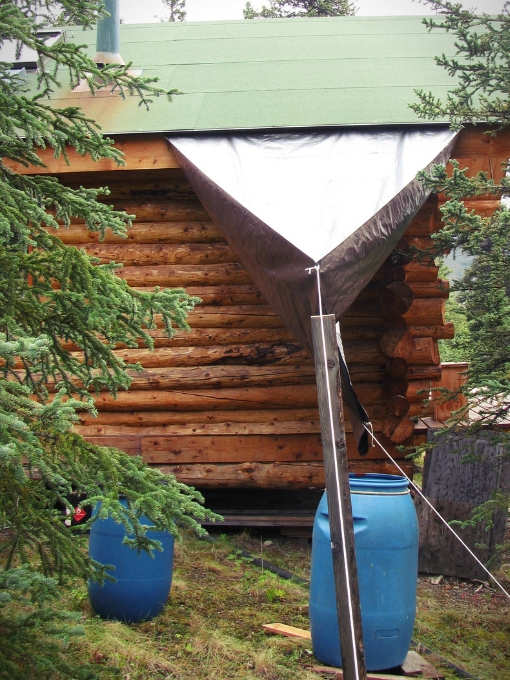 Stewart discovered that the water’s reluctance was not only because of the drier weather in those years but also because of time working on the spring box itself; it has been pushed up from the ground by many cycles of freezes and thaws.

Recent summers have been wetter and the seep has provided sufficient water to once again support the water system from the start of our stays. It does take a day or so to get our bearings and connect the water system. Until then, we use containers of water filled and set aside the year before.

If there’s a late summer or early fall freeze, the water strategy changes yet again. Then, we listen to the radio for news about cold, not rain. The water pipes rest directly on the ground, which keeps them somewhat warm and lets them work if the temps are in the thirties or even the twenties. But if it sounds like we’ll get temps in the teens, we’ll fill water containers and Stewart drains the pipes.

The short story is that we think about water every day while were here. At home in California, we rarely do the same. One year we calculated that at home, we were using an average of 180 gallons of water per day despite drought conditions. In Alaska, when we have to haul water on our backs, we figured out that we get along fine on just nine gallons each day, a little more on laundry day—about five percent of what we use at home.

10 thoughts on “what about water?”