We are stuck. Apparently there’s some communication problem involving Nebraska and a malfunctioning signal, which doesn’t make much sense to me considering we’re sitting here south of Eugene, Oregon. But they have to “go out there” and adjust something by hand, and we have to wait here while they do it. It’s been about an hour so far.

Spending twenty-four hours on a train isn’t as romantic as I imagined it would be. What I miss most is air. Whatever this is that we’re breathing doesn’t fully qualify. It’s not like trains in Alaska, where you can stand outside between the moving cars and let life blow all over you. Amtrak is an airtight experience except, it seems, where signals are concerned.

The attendants on this train are almost uniformly cranky, and I suspect it’s because they aren’t getting enough air. Some of them are simply rumpled while others appear drained of something vital, as though they went through the wrong wash cycle and spent too long in the dryer.

The passengers are funny, too. There’s a train buff who wants you all to know that the Coast Starlight is the only Amtrak train with a Parlour Car and that we left the Klamath Station exactly eight minutes late. (The Parlour Car is quite nice, air or no air. It’s where I’m sitting right now in a cushy seat where I can swivel in one direction and see some trees that we aren’t passing and then rotate in the opposite direction and see some other trees that we aren’t passing.) There are some Bible campers practicing memory verses in English, German, and French. There are also many people — even those of an age you might assume would know better — who think nothing of popping, boinging, and crashing their video games from one end of the tracks to the other.

Plus, it’s weird when a guy wearing nothing but boxer shorts hops out of his roomette and wriggles past you in the very narrow passageway at 6AM, heading for the shower. Dude, put on a shirt. (I decided to skip the shower altogether, though I hear it’s like a closet and you can use it while sitting on the toilet.)

My favorites, I think, are the two from Peoria, Illinois who told their travel agent they wanted a “train experience” to connect them with their Alaskan cruise out of Seattle. They got what they asked for and a little bit more. The agent booked them on trains all over their home state and then sent them to Sacramento before pointing them in a northerly direction. This is day four and the husband put the worst of it this way: “We took trains all over the state of Illinois and when we finally got headed west we ran over someone.” They’re understandably relieved to be on the last leg of their train adventure; they also had a way of telling their story that had the half the Parlour Car falling out laughing. Then they bought drinks for folks, including me. 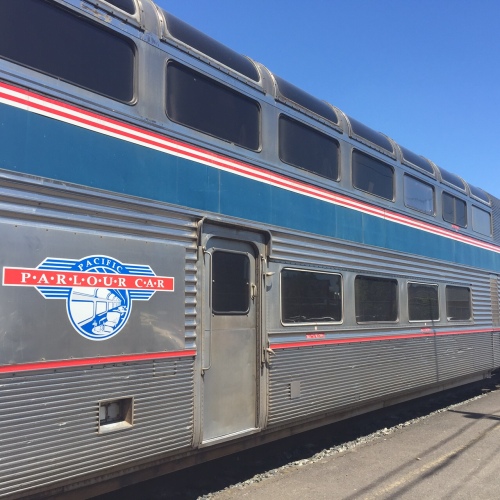 So we’re doing just fine here on the Coast Starlight. And the trees are still out there, breathing.

P.S. There’s always something else! Today, it’s a neat video that gives a tour of the “roomette,” Parlour Car, and other highlights of the Coast Starlight train.

7 thoughts on “brakes on a train”